Watching this video clip makes me laugh, not just from thinking of how little of an idea I had about what I was doing, but also from anxiety of what was about to happen in just the next few minutes after I turned the GoPro off.

From day one of deciding that I was going to do this “Scooter Thing” no matter what, all that determination didn’t really leave me a whole lot of space in my brain to figure out HOW exactly I was going to do ANY of this.

“Trial by Fire”. Yep, I think that about covers it.

I know there is a country song waiting to be born out of all of this, but for now I stick to trying to write it all down.

So here’s the backstory of what is going on before and after that video. My friend who I was staying with was very smartly encouraging me to do a ‘test ride’, to make sure everything would work, and that I knew what I was getting myself into. I, for a few reasons that I didn’t give myself any time to think about, didn’t want to waste time in a silly ‘test ride’. And by ‘test ride’ I mean even attempting to pack everything I was planning on bringing with me on my trusted little SYM Scooter, Jolene, before I was going to leave. De-nial isn’t just a river in Egypt…

Obviously to me now, I had WAY too much of everything. The weight was all wrong, the straps weren’t tight enough… Oi, the list of what a disaster this first pack job was could go on and on. So then what happened next? Ah yes, let me share with you this wonderful fiasco: 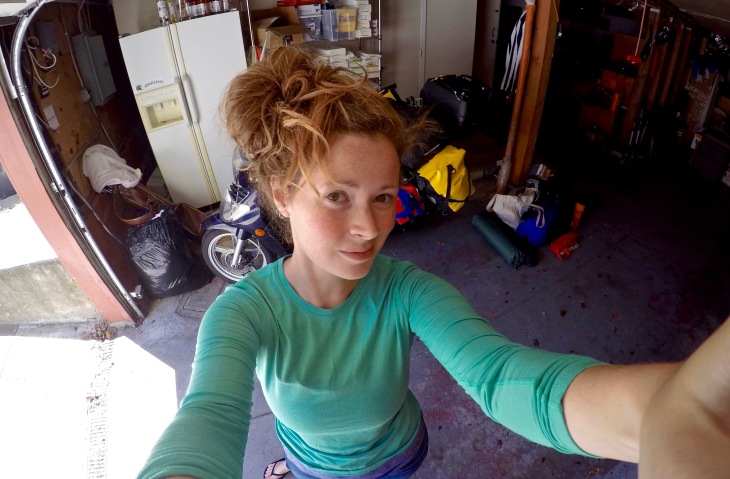 After I had finally strapped the last bits of whoozeits and whatnots to every inch of Jolene and suited up, I was ready. And by ready, I mean scared to the point of hearing a high pitched whine filling the expanse between my ears, that mythical place where my brain once held residence. It was that whine that comes on your TV after scheduled programming has gone offline and rings deep into the echoes of nothing. Adrenaline was raging through my bloodstream and somehow allowing my body to keep moving.

I saddled my scooter and began testing the new weight by leaning the scoot from side to side. My heart started to sound its beat in my ears making the rest of the world fall dull and listless. My friend’s roommate moved his car from in front of the 45 degree angle driveway allowing ample space for me to spring into action.

“You can do this”, I uttered again and again to myself.

“This will work”, I prayed to be true.

“Please don’t die”, whispered every cell in my body.

Jolene sprang to life and I began to gently open the throttle. Easing up the driveway, I finally crested to the top. I shakily let out the stale air that clang to my chest and fought to beckon in a fresh batch. The driveway lead to another 45 degree angle street. I cursed myself for thinking San Francisco would be a good place to learn how to ride a weighted bike. I then looked up and down the hill debating whether I would have a better chance of staying upright if I went against or with the grain of gravity. I chose throttle power and took a left up the hill.

Immediately I knew something was horribly wrong. I had read about this mysterious ‘wobble’ but had yet to truly experience what terror and lack of control it brings. The handle bars jerked from side to side begging to rip me from the scooter. Hoping that a little more speed would even it out, I summoned every ounce of strength in my shoulders to hold the bike steady another few feet. A moment of peace hung in the balance, and then the wobble broke free from its silence. Knowing that there was no way I was going to pull out of this still standing, I slowed sweet Jolene down as quickly as I could, swung my legs free from the dangerous metronome, and tried to set her down as gracefully as I could.

Because the embarrassing moments of my life have never been enjoyed alone, my friend’s roommate rushed out to meet me as I had barely made it 20 feet from their driveway. I also apparently I had another observer who was watching from their parked car, but leapt to my aid even before Jolene was down. The new addition to this scene was also a long time rider, and started telling me about how important weight distribution is. Having experienced that learning experience just seconds before, I was most certainly on the same page. Luckily due to the fact that Jolene was packed to the gills, the only thing touching the pavement was rubber and luggage. After freeing her from this insane load, the boys helped me right her, and I guided her into a parking space. I thanked them both and waved them away. Somehow, that experience only made me more determined to figure this whole thing out, and as an insane amount of adrenaline was still coursing through my veins, I hopped right to it.

I dumped everything on the garage floor knowing that I needed to get rid of about half of all that I was carrying. Not really having a plan, so then trying to plan for everything, left me packing a lot of self sufficient gear as well as nonsense. Determining that I probably wasn’t going to be Overlanding into No Mans Land for days on end due to the fact I didn’t have that much capacity for gas, and was on a scooter, I started tossing those bits into a pile. I had plans to meet a friend for dinner in Redwood City that night, and as that time was quickly approaching, I hardly even remember what I got rid of. After about 15 minutes I had a new, much more reasonable looking pile sitting at my feet. Looking at Jolene, I still scratched my head trying to figure out what needed to go in each pannier, the top box, or the watershed dry bag strapped to the seat. I wanted to theme each bag in a way that I wouldn’t have to open everything to try and find a simple item. Feeling lost, I took a break and started “Googling”.

‘How to weight a motorcycle for long distance travel’

‘Solo woman motorcycle travel how many pairs of underwear’

‘What in the world have I gotten myself into’

‘WebMD: am I dying? Symptoms: Insanity’

After piecing together some advice from the internet. I decided I would heed my friends advice from earlier: PRACTICE. I laid out all of my bags on the ground and after making an equal number of themed piles. I then started packing my stuff away and then testing for balance and weight. A general rule of thumb became clear: keep the heavy gear as low and as close to the center of the wheel as possible. Light bulky stuff, like my sleeping bag and down jacket, can be housed the furthest away. I then tried to make the gear I was planning on putting on the seat as seamless as possible to create the least amount of wind drag.

Then? I practiced. First step, I loaded the top box to see if I did a good job making it light enough, then I took a lap around the block. I figured not only would it be a good idea to isolate the feeling of what each new piece was like, it would help me better understand what the placement of each item did to change the balance of Jolene. Not to mention, my ego was a dried hunk of dust, so rebuilding my confidence that I could even ride the scooter was good too. Taking off with the top box, I immediately felt the adrenaline start to slow down as there was no evidence of wobble, or of crazy unbalance. My smile began to curl back into my cheeks.

Second step: I loaded up the panniers after making sure they were the exact same weight and took a lap. I noticed how amazing it felt to have the heavy stuff down low in the bags. The scooter felt secure, and I felt more sure of the balance. I thanked science and other’s experience for helping me decode the packing game.

Lastly I loaded up the blue dry bag that held my electronics, followed by my table, sleeping pad, and backjack (a wonderful little camp tool to convert a sleeping pad into a chair). I then sent out my final goodbyes before I could rethink what I was doing.

Load secured, I took off, for REAL this time. Doing my best to remember to breathe, I listened to my in helmet directions on how to avoid major highways, and went. Lo and behold, the shiny side stayed up! I battled the horrific winds, rush hour, insane lane changing buses and squashed the fear demon that was dancing at my heels. In all the chaos swirling about on the pavement, I started to feel worry fall off from my shoulders. The thought that this was going to work out actually began to sound like truth. My wonderful friend who was housing me for the last few days called me from work as I was hitting my high.

“Are you on your scooter?!”

*I then quickly retold her the story of my first attempt*

“Also, you will find a bag and a camp chair in your garage, I don’t really know what’s in that bag, but maybe some day you can mail it to me?”

Ending the call, I thanked my lucky stars that I have the most fantastically kind people in my life that support me in all sorts of crazy ways.

With a short two hour ride to break in my first day of Scooter Life, I made it to my traveler friend’s house in Redwood City, greeted by a delightfully full glass of wine, an incredible dinner, and a night full of laughter and conversation.

I am so happy that in my beginnings of route planning that I made this badass adventure babe the first stop on my scooter journey. One thing that I would continue to learn on my travels is the mystery magic of ‘plans’. You can think you’re arranging for something simple, and life goes ahead and makes it even more magnificent and meaningful than you ever could have planned for. I went to bed that night with boundless inspiration and determination to tackle the days ahead.